Yesterday I got very little sewing done!  Are you shocked?  I don't sew well in a car even when I'm not driving!


And we went on a trip to Greenwich....My eldest is interested in physics and astronomy so we had promised to take her to the Royal Observatory.  Historically this is an important place as it is where we eventually managed to measure travel around the globe east to west before GPS that is  - the invention of longitude, which would have been impossible without the invention of a clock that was accurate out at sea! 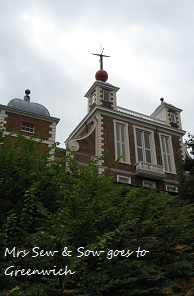 The courtyard at the Observatory has a line going through it and everyone wants their photo taken with one foot either side as this is the Greenwich Mean Time line, the Prime Meridian, 0 degrees longitude!  One foot in the West, the other in the East! 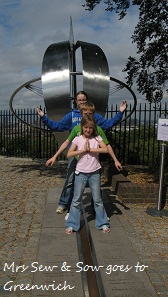 We saw a great show at the planetarium led by a doctor of Astronomy.  It showed us the sky as it was yesterday evening which is just as well as it was too cloudy to see for real.  But be on the lookout for Jupiter in future as it has just come into view for us in the Northern Hemisphere!  Saturn has gone south...!
She gave us a view of our solar system from outside our galaxy the Milky Way and ended up giving us a brief look at the sky at night from Australia!  With a better view of the Milky Way than we get in the UK or US! 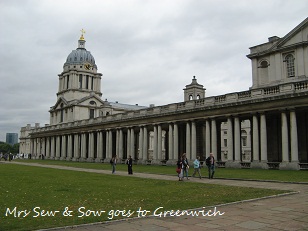 Well you would think that was exciting enough but before we climbed the steep hill up to the observatory around the grand buildings of the Royal Naval College there was a bit of a commotion.
A film crew from the BBC were much in evidence filming a period drama... 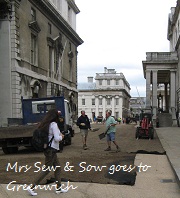 This is how you change a modern street into a Victorian one - a bit of tarpaulin and dirt!
Here are some of the cast getting instruction 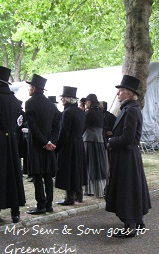 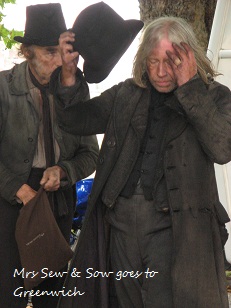 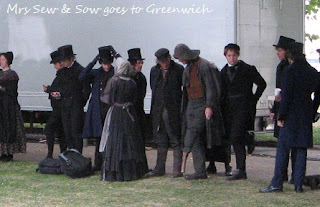 Can you see the man with the pegleg?  And this dapper young gent posed for the photo - is he playing a major part? 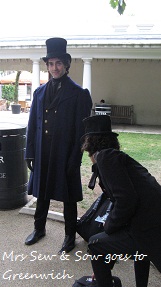 And is this less salubrious chap capturing my daughter? Or making her laugh? 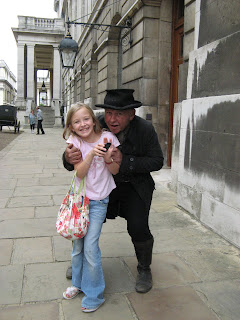 Well you are possibly wondering which drama was being filmed?  As it is from the BBC you could have 'great expectations' of a quality production - need I say more?


This was time travel indeed....