In the last few days after the challenge of finishing a UFO top I thought I'd turn my attention to a WIP!

No real reason it just shouted ME NEXT louder than anything else and the space was on the wall!

So I haven't really said anything on my blog about this one for fear of injuring Helen as she went through a phase of banging her head on her desk every time I started a new project - which I have to say was often in March/April time this year.

I have been wanting to make a delectable mountain quilt - a very traditional block - for a long time but I didn't want a traditional looking quilt!

I started off by deciding my colours for this quilt would be purple and grey - not a scheme I've gone for before! And I started making blocks following the tutorial on Bonnie Hunter's excellent blog which is a prime source of lots of good information.

I made my blocks from 6.5" squares - placed together to make HSTs.  From there on follow Bonnie's instructions - to get a block that is the very odd sized 5.5" x 8" finished!  Bonnie has a different size in her tutorial but I'm posting this here so I can remember what I did!   I had to work it out again when I re-started this project ....grumble, grumble!

Anyway piecing the blocks was fun but I wanted a modern layout so after playing around I came up with this!   I think it is quite dramatic but meant I'd have to piece in lots of background.  My original intention was to choose just one grey background but then I thought scrappy would be better.

After cutting out most of the background I thought it still a bit boring and remembered Charlotte's brilliant idea for adding colour to her background by adding little triangles to the background - I took the easy way out with the stitch and flip technique to add a bit of purple and bright pink!  I think it works - for me anyway!

This might be my most modern looking quilt top so far though it is still grounded in tradition. 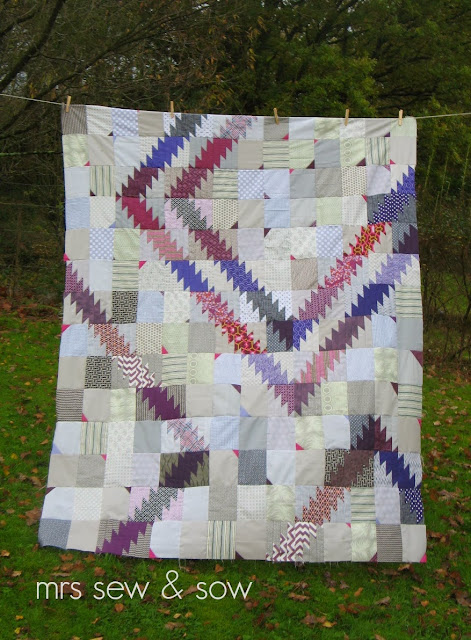 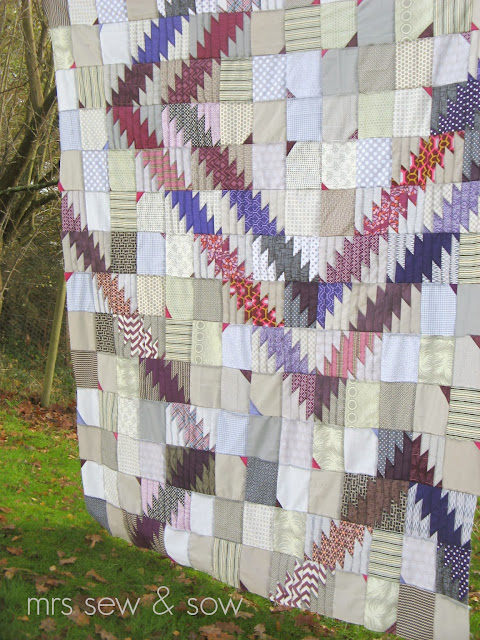 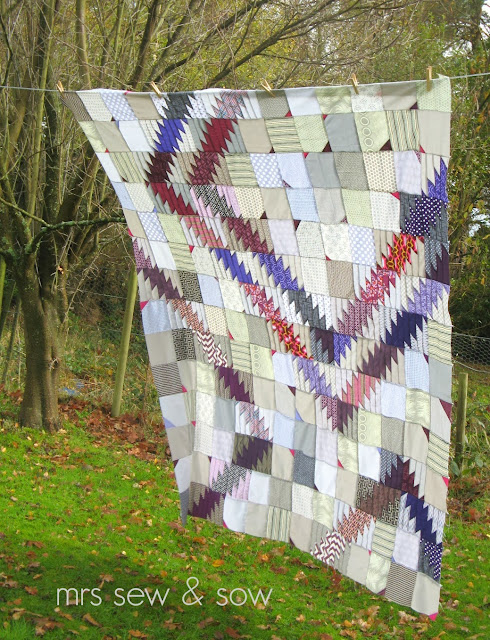 I started the Farmer's Wife oh about a year ago and I got as far as 32 blocks.  But then I stopped. 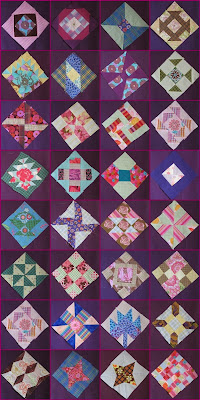 Maybe because I wasn't that happy with the fabric choices? - I had decided big florals and checks and stripes would be in every block.  What was I thinking??

Maybe it was my less than perfect piecing?  Oh dear where are my points?  Answer: All over the place! 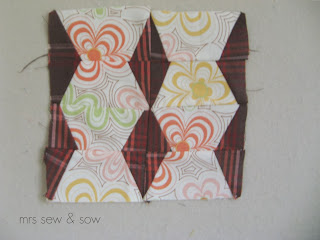 The good news is I seem to have improved on finding a use for those florals and with a bit of brighter newer fabric I think that my fabric style works well enough though I probably wouldn't choose to work with some of those fabrics again! 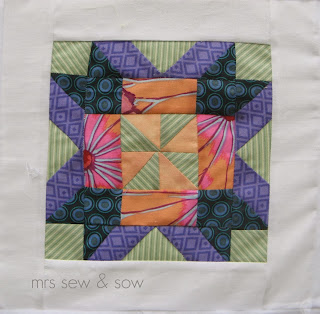 And not only that but my piecing has improved!  I redid some blocks and although not all points are present, they are more there than not!  But I started this project to learn and improve and I think I have!


And I needed to with some of those recent blocks which were pushing me well out of my comfort zone.  1" squares and even some 1" HSTs !   Argh!  They are not perfect but I pieced them all using templates - no paper piecing here - it just felt like that would be cheating.... 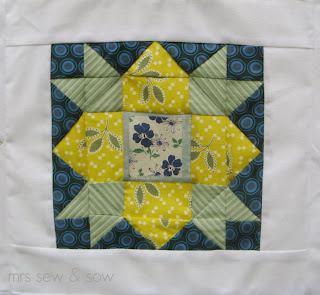 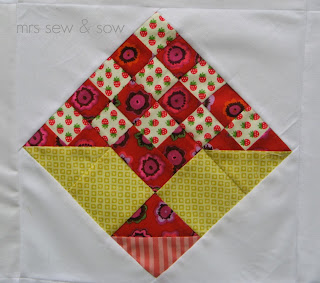 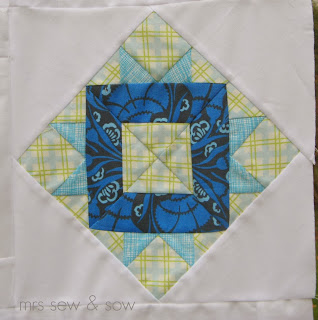 So after all that talk here is the quilt top...well half... 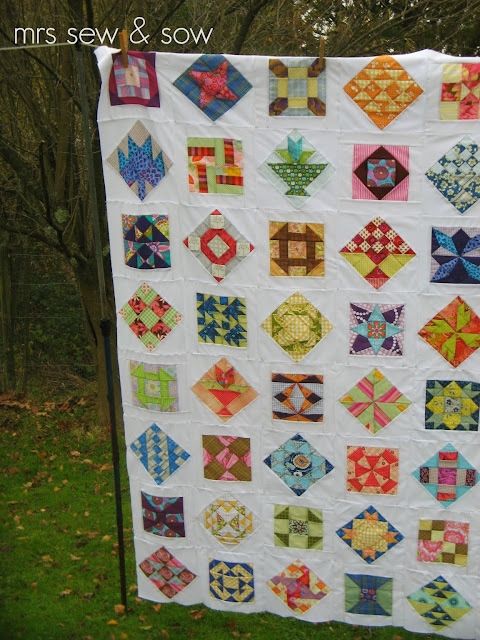 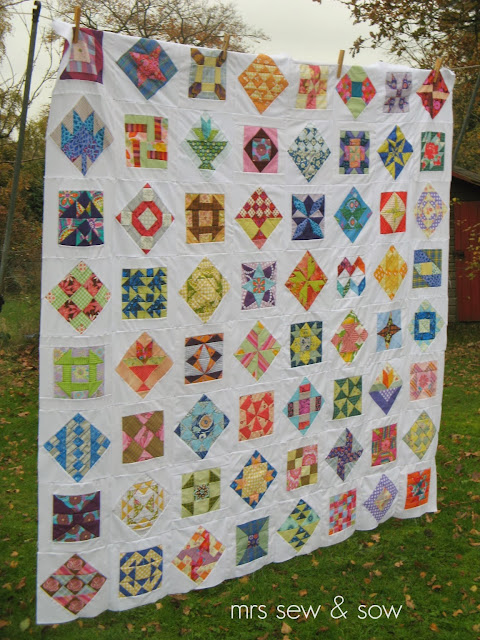 And finally the Full Monty! 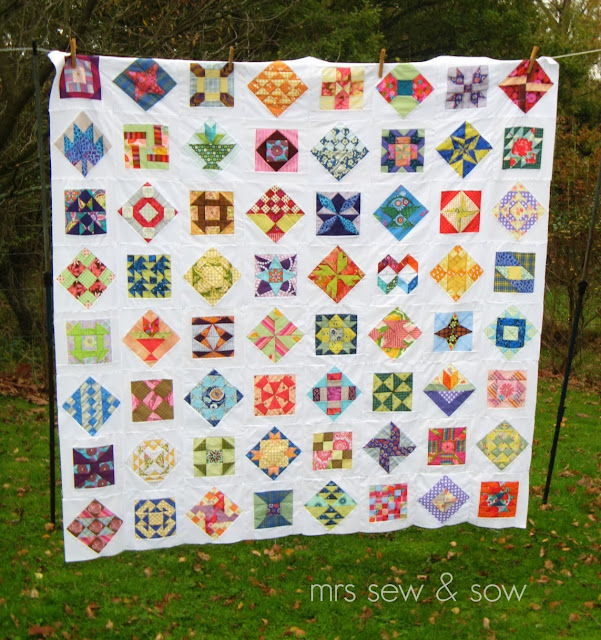 Was it worth doing?  You bet - though I did wonder on many occasions!

The clever Charlotte has picked a great block for Stingy Bee - full of geese!

I am not usually a fan of geese as my last encounter did cause me problems but this time I seemed to fly through safely without too many difficulties.

Here are my blocks.   I just love the colour scheme so maybe that helped this time around! 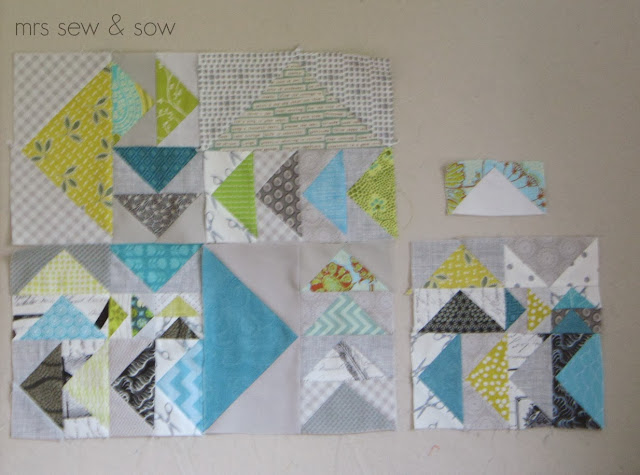 Particularly this quarter with all those little bits... 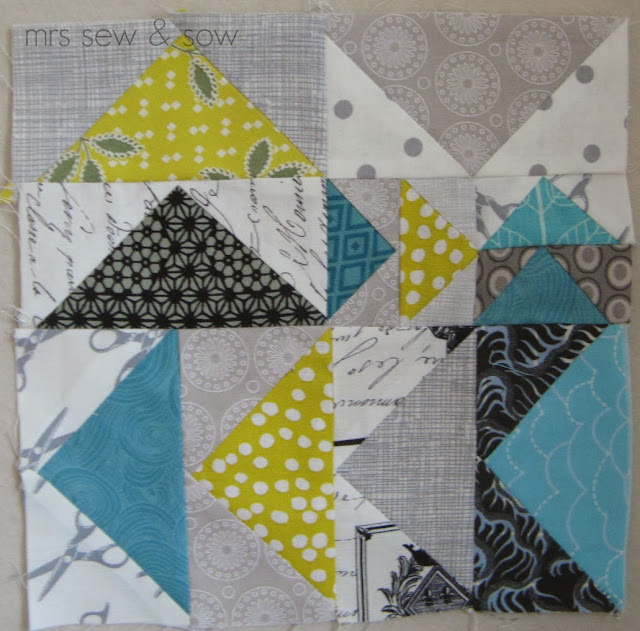 So much I did it twice! 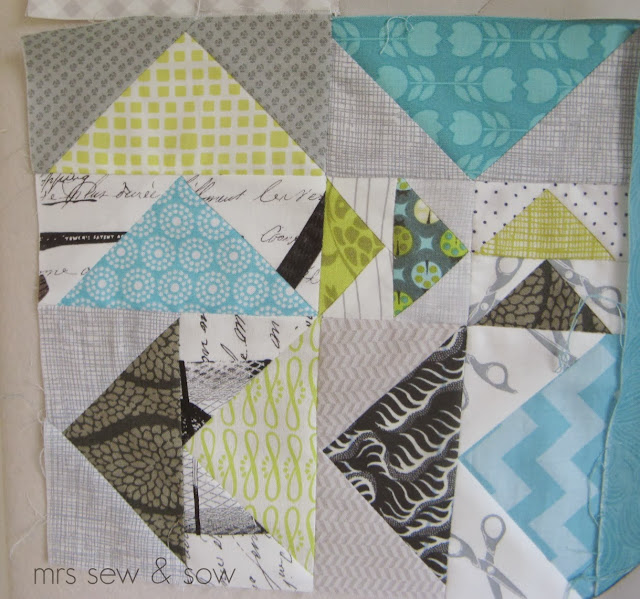 I just squeaked into the deadline for the Trim the Tree sending !  I have to confess I was a bit confused and took the deadline - it must be in the post by date - to be the posting is open date!   Hence this last minute rush to get it all done in time!  oops - note to self - do check the details of what you sign up to and re-check!

Anyway my latest batch of tree decorations were birds! 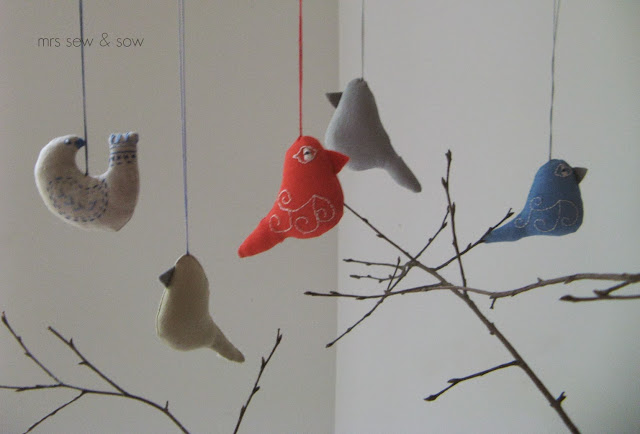 They are made in linen - which meant a few frayed edges so tiny stitches were necessary to make sure they didn't just dissolve.  The tail was particularly tiresome to turn out and stuff but I got there in the end!

It was fun to add a bit of handstitched detail - only backstitch and satin stitch for the eye.  And the beak is a bit of felt!   Ideally I would have stitched both sides so when they refused to turn round I wouldn't feel like they were giving me the cold shoulder!   I did the stitching before assembling them - thought it would be easier.

We happened to have this twig in the house which my hubby calls kindling ??? I know slightly bonkers but that's how things roll in this house!   Not complaining now though as it was just what I needed to stage this photo!

That's that swap done - now all I need do is wait for a package or two to arrive.   Well four actually!   And I have to sort a little side swap of Christmas decorations out - and I have some others to spare!

I followed Amy into the Trim the Tree Swap and must say it was a great move!

I got my partner information times four !   Yes you make for four different people!

I found that a bit overwhelming at first as there were too many tempting things to make and only really got going in the last couple of days which is pushing it a bit as the deadline for sending is Tuesday....Argh!

But I am enjoying making these little treasure so much can you tell? 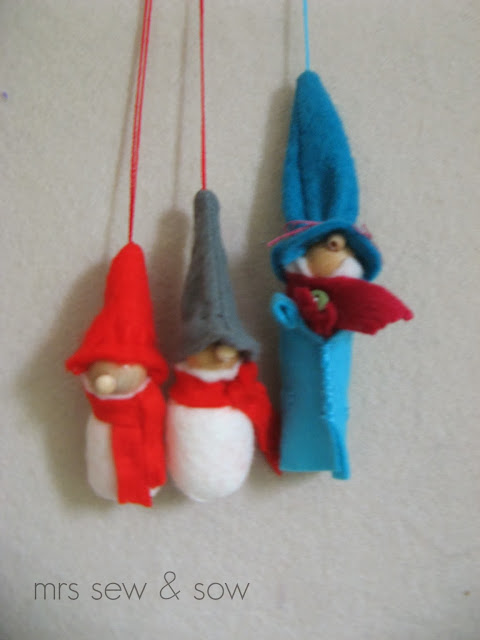 These are supposed to be Tomte or elves but I think the blue one looks more like a character from Dickens - it's just the way he turned out - 'ever so humble Mr Copperfield...' or maybe Bob Cratchett or Scrooge??   He was the first one of these!

Then the penguins decided to leave their usual black and white attire behind and don a more festive hue or four!

Miss Kitty wanted to be the angel on the top of the tree !

And the cardinal bird thought he looked festive enough in his red feathers! 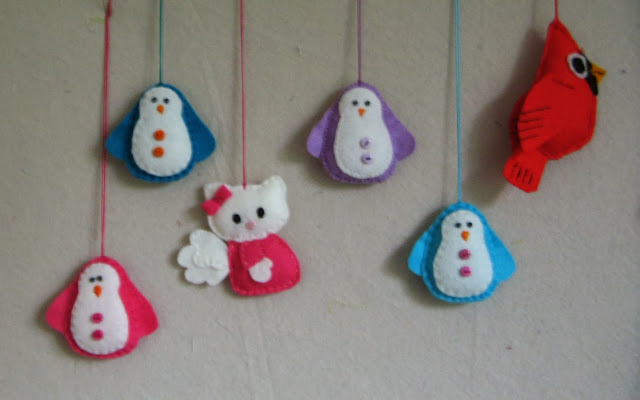 I'll be bidding four of these goodbye soon as they make their way around the world and the good news is - I'll be getting four others!  Yeah!

Apologies for the disruption to our normal service - all things UFO and bee block will be resumed shortly!

I have a major UFO update to tell you about but I just want to make two more blocks...

'Tis done and will be on it's way to it's new ATC home today!

With a bit of window dressing - just 'cos! 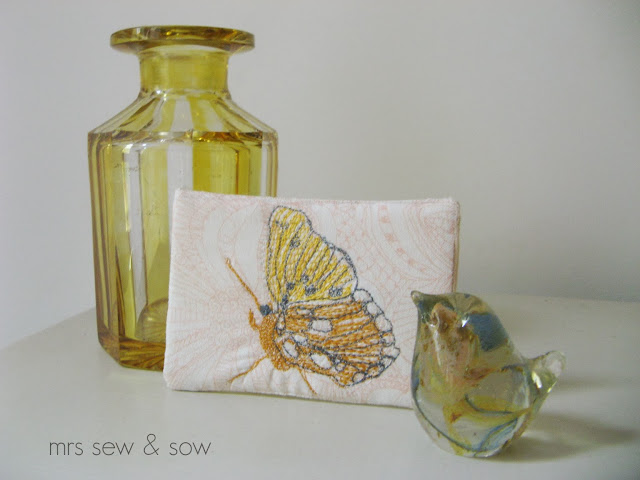 Do you think the birdy looks peckish? 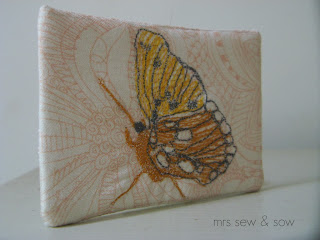 I really like the way the background - an Art Gallery fabric I recently bought which is of a sketchy flower - mimics the little sections in the butterfly wings!

Using my #Aurifil win from Lily's Quilts - the 12 weight is lovely to do this kind of stitching with and I just love those colours!

When is the next round of the Very Berry Handmade ATC Swap Ali, and will you be joining in?
Posted by Nicky at Wednesday, November 06, 2013 13 comments:

Last time I swapped an ATC I had fun and this time has been no different.

It is a quilt in extreme miniature - beyond mini quilt status! 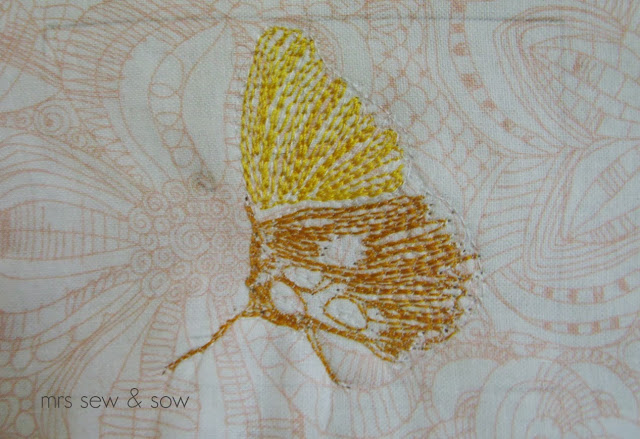 And today I finished the stitching - I hope my subject matter is more obvious now! 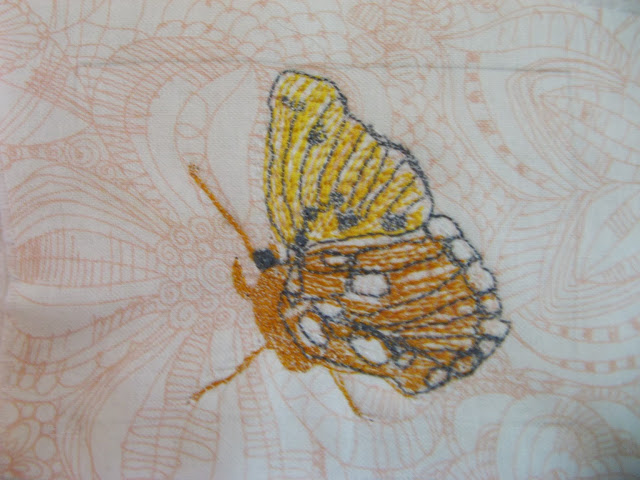 And I also hope my partner likes it as otherwise my eldest daughter has taken quite a fancy to it!   Just got to finish it off into a card shape, sign and send it!

And this is the pumpkin filled one I received from Dawn, called Autumn Festival!   I can see she has put a lot of work into it with handstitching, beads, applique and colour!  Thank you so much Dawn for such a splendid reminder of everything Autumn! 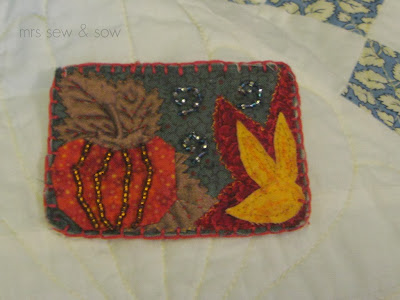 And thanks Ali for getting us all going in your wonderful Very Berry Handmade ATC Swap!  I am sure there will be other rounds when even you can join in!
Posted by Nicky at Tuesday, November 05, 2013 7 comments: