I have been showing you a few blocks that I have made for my Star of Africa bee!

It is often the most challenging bee to make for as we have a theme given to us by our Queen Bee and then need to work out how we can represent our country in that theme!

Well it seems like I set the girls quite a challenge too as I asked for children's story characters, myths, legend or fairy tales typical of your country!

I have shown you some I have received in past posts but now I have just received one from Irene in Guatemala   Isn't that cool!?

Guatemala is in Central America bordering Mexico, Belize, Honduras and El Salvador!   I did have a vague idea but I'm glad I looked it up!  The Mayans once populated this country and there are many Mayan sites there still.  If you want to know more then look here!

Here is the block from Irene 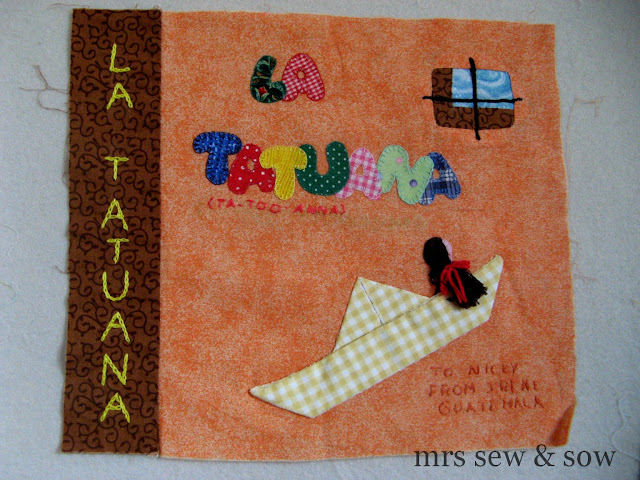 The story behind it :

Manuela came to the city and got a reputation as a healer, witch and fortune teller.  She was known as Manuelita la Tatuana.  Someone told the authorities and she was arrested for practicing witchcraft, imprisoned and sentenced to death by burning even though she had helped many people!

She asked her jailer for a piece of coal and drew a ship on the wall to his great amusment.  She wove some magic and the ship became real and took her through a tiny cell window to freedom. No-one saw her in the city again!

I think the moral is - don't go to the city girls especially if you are young, beautiful and a bit magical!

And here is a cute wee purse that came with it and some beautiful woven fabrics too! 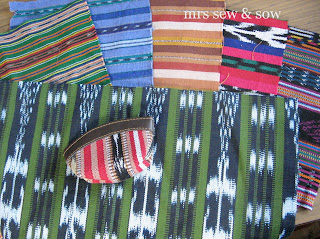 Thank you so much Irene!